The name Ioannis Giannopoulos is mentioned under the year 1712 in the invaluable records (which include members, baptisms, weddings, deaths, etc.) of the Roman Catholic Diocese of Saint Augustine that date from 1594 to 1821 and were digitalized in the last 8 years. According to the records, Ioannis Giannopoulos came from “Arcadia, Morea”. At that time, every resident of that region was Catholic due to the Spanish rule of Florida. The baptism of his son, Georgios Giannopoulous, took place in 1752, also according to the records.

This date matches the date on a title deed of the school house, as it is evident that Georgios Giannopoulos was born in 1751. According to page 3 of the Spanish census of 1793, Ioannis Giannopoulos (grandson), “the son of Georgios (Giannopoulos) and Maria Canela for 42 years” is listed under number 141 as the owner/ resident of the “wooden house” of lot 30 where the school was located. So, he was born in 1751 and baptized in 1752.

All of the above, lead to the following conclusions:

The first Ioannis Giannopoulos, a carpenter, was sent by Spain to the US during the first Spanish rule of Florida, namely during the first decade of the 18th century along with a few other Greeks. A few years later, he married and had a son, Georgios.

His grandson, Ioannis Giannopoulos, the son of Georgios, focused mainly on the school house after 1770. He was a widower since 1778. He married again and (according to the birth records of 1792-1799) he had two children with his second wife, Georgios (1794) who was named after his grandfather and Maria (1796) who was named after her grandmother and later became a teacher at the school. The surname of Maria’s husband was Darling.

The historic first two-story wooden school house of the US (“the oldest wooden school house”), that was made by Ioannis Giannopoulos senior, was first used as his house and later converted to a school house by his grandson after 1820, when Florida became part of the US under the terms of the Adams-Onis Treaty in 1819 (it became a US state later).

According to a title deed of the records of the town of Saint Augustine dated 1716, Ioannis Giannopoulos was the owner of the land, where he created (between 1710 and 1715) the first wooden school house of the USA (which is now open as a museum). The school, which wasn’t a Greek one, was operated during the early 18th century by another Ioannis (Juan) Giannopoulos, the grandson, who we thought to be the creator of the school house until now. However, everything points to the fact that he was the grandson of Ioannis Giannopoulos senior (the creator of the school house) and the son of Georgios Giannopoulos. The school house was definitely built after 1703, because the British had burned down every house of the town in 1702.

The Greek Deputy Minister of Foreign Affairs, Terence Quick, visited the first Greek school in all of the US, that was made entirely of wood and was built by Ioannis Giannopoulos from Arcadia in 1773. He laid wreaths at the old cemetery, where the graves of Giannopoulos’s daughter and other Greeks are located, as well as at the national cemetery of the town. The historic and first "wooden school-house" in USA, built by the first Ioannis Giannopoulos 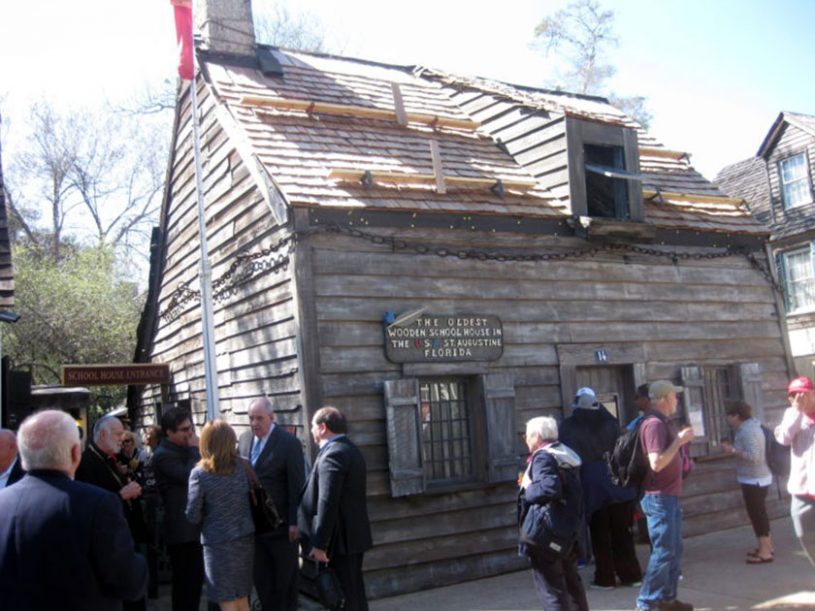 St. Augustine, Florida. The Greek Deputy Minister of Foreign Affairs, Terence Quick visiting the first Greek school in all of the US on Sunday, February 28, 2016. 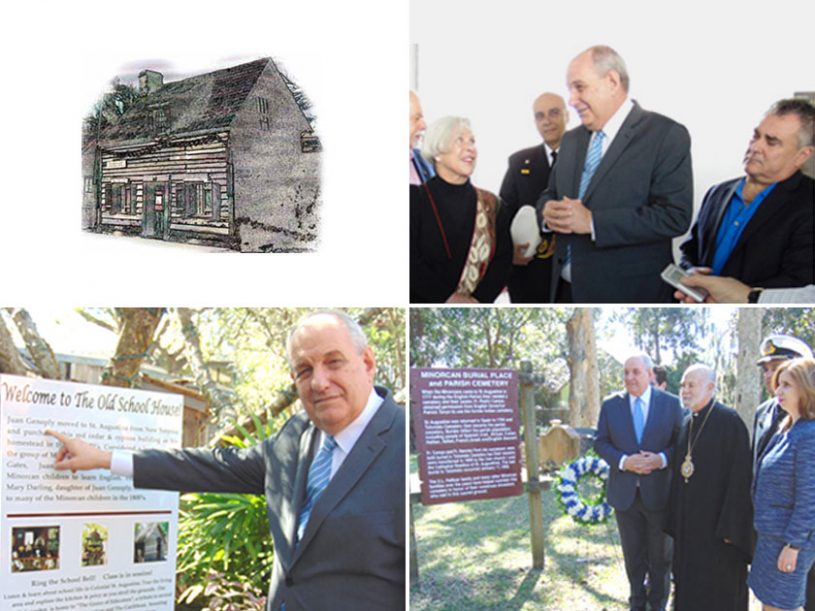 At the center, the Deputy Minister, Terence Quick points to the name of the Arcadian creator of the first wooden school of America (1788), Ioannis Giannopoulos, on the sign, whose daughter (Maria) was the first teacher of the school. The wooden school, on the upper floor of which the family used to live, is open as a museum nowadays.